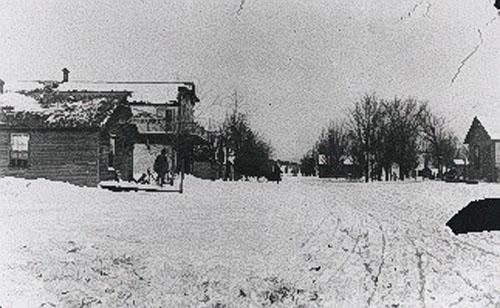 Most of Cottage Grove’s early settlers came from New England. They recreated the East’s Greek Revival architecture and style of government, giving the township the nickname “New England of the West.” Most were grain farmers who saw the area’s fine natural advantages of rich soil and convenient access to markets. Many turned to dairying and Cottage Grove became known for its creameries and dairy farms.

One of these New Englanders, James Sullivan Norris, became the founding father of Cottage Grove. After stints at St. Croix Falls, Afton, and Grey Cloud Island, he made a claim in 1842 in section one on a farm he called “Cottage Grove.” Fellow New Englanders Joseph W. and Theodore Furber settled in Cottage Grove in 1846; their brother John moved into the area in 1851. John and his wife, Isabella, ran the general store in the small settlement that grew up in the neighborhood of these first farmers.

In 1854 John Furber built his family a two-story home on what is now called Lamar Avenue. With its Italianate design, clapboard siding, and tall, narrow windows it looks like a transplant from New England. Because of its significance in county history, the home is on the National Register of Historic Places. Another historic home still standing was built by Robert and William Watson around 1851 from lumber that had made its way via the Mississippi River from St. Anthony Falls.

In the spring of 1871, John and Joseph Furber platted the village of Cottage Grove—now Old Cottage Grove—on a parcel of land in section 12. A drug store, dry goods and grocery store, two blacksmith shops, and a wagon shop soon provided the hum of business in the new community. There were two doctor offices, those of Dr. A. H. Steen and Dr. William Furber, a fine hotel—the Cottage Grove House—and several churches. In the late 1870s, several German-speaking families settled in eastern Cottage Grove, adding cultural diversity to the area. The first county fair was held in Cottage Grove in the fall of 1871.

Old Cottage Grove was able to thrive as an inland town because it was connected to the river towns by wagon roads. A road was opened from Grey Cloud Island to Stillwater via Old Cottage Grove and Afton in 1851. Another early road that ran through the village was the Military Road authorized by Congress in 1850 to run from Point Douglas to Fort Ripley by way of St. Paul. Hastings Avenue, which connected the township with St. Paul, was replaced in the 1940s by all-weather Highway 61.

In 1869, the St. Paul & Chicago Railroad (now the Milwaukee line) constructed a rail line through the western part of the township from Hastings to St. Paul with a station at Langdon. The railroad village of Langdon, platted in 1871 by J. T. Dodge, quickly turned into a bustling trade center and shipping point. Soon it contained an elevator and feed mill, hotel, three stores, blacksmith shop, and a school. A Catholic Church was built in 1873. By 1875 George Woodward and others had organized one of the first creameries in Minnesota as the Langdon Butter and Cheese Factory.

The Cottage Grove Lyceum was established in 1852 by several early settlers anxious to promote education and social reform. The Lyceum Hall, built in 1855 near Old Cottage Grove, became the home of the first public library in Washington County, and location of the settlement’s annual town meetings. A local newspaper was published there as well, It was used as the town hall for 17 years, after which meetings were moved to a new town hall in Langdon.

By the turn of the century the township with its two rural villages had approximately 100 residents. Cottage Grove remained a rural township for over a century. But in the 1950s, with the advent of Thompson Grove, a housing development of ranch-style homes, the once-rural area began to experience the effects of suburban sprawl. The population jumped from 833 residents in 1950 to over 4,800 by 1960, and more than 13,400 residents by 1970. By 2000 Cottage Grove was home to about 30,000 people and was one of Minnesota’s fastest-growing communities.

Cottage Grove Township included the eastern half of Grey Cloud Island until Grey Cloud Township was formed in 1960. In 1961 there was an effort to incorporate Cottage Grove and Woodbury into the Village of Washington. The idea was rejected by Cottage Grove voters in the 1963 election. Special legislation to create a Village of Cottage Grove was passed and approved in a special election in July 1965. Cottage Grove became a city in 1974.