The first settlers found the land in Forest Lake Township rolling and covered with timber, interspersed with hay meadows or marshes. Because much of it was not easily farmed, and because it was 14 miles from the St. Croix River, the highway of the early immigrants, Forest Lake was one of the last townships in the county to be settled.

The north shore of Forest Lake was on the boundary line set out by the U.S. government in 1825 to separate the warring Chippewa (Ojibwe) to the north and Sioux (Dakota) to the south. The area was used by both groups of Indians for hunting, fishing, and gathering wild rice, but because of the danger from war parties no modern-era Indian villages were established in the township.

In 1855, Louis Schiel, a German, came up from St. Paul with a prospecting party following the old road from St. Paul to Wyoming (roughly along Centerville Road) and settled south of the lake. William Nettleton of St. Paul started a stage line between St. Paul and Duluth which followed this road to Sunrise on the St. Croix River, where it joined the Military Road. This stage road allowed people to move north from St. Paul. By 1863 the township had 47 families, 39 of them farming with a total of 511 acres in cultivation. It also had a schoolteacher, Mary Poston, who began instructing children in her log cabin on the lake in 1861.

Forest Lake Village got its start as a fuel stop for the Lake Superior & Mississippi Railroad, which opened in 1868 to Wyoming, and soon ran from St. Paul to Duluth as the Duluth & St. Paul Railroad (later the Northern Pacific). The village was platted in 1868 by the railroad, which immediately established a woodyard, water tank, and depot at the site. This location was a boon to farmers clearing their land, for they could haul their logs to the railroad to sell for fuel.

Banking on railroad traffic to come, German-born Michael Marsh opened a store at Clear Lake in 1867. That building soon burned, but the following year Marsh was back in business with a resort hotel, post office, mercantile store, and boat landing on the northwest shore of Forest Lake. 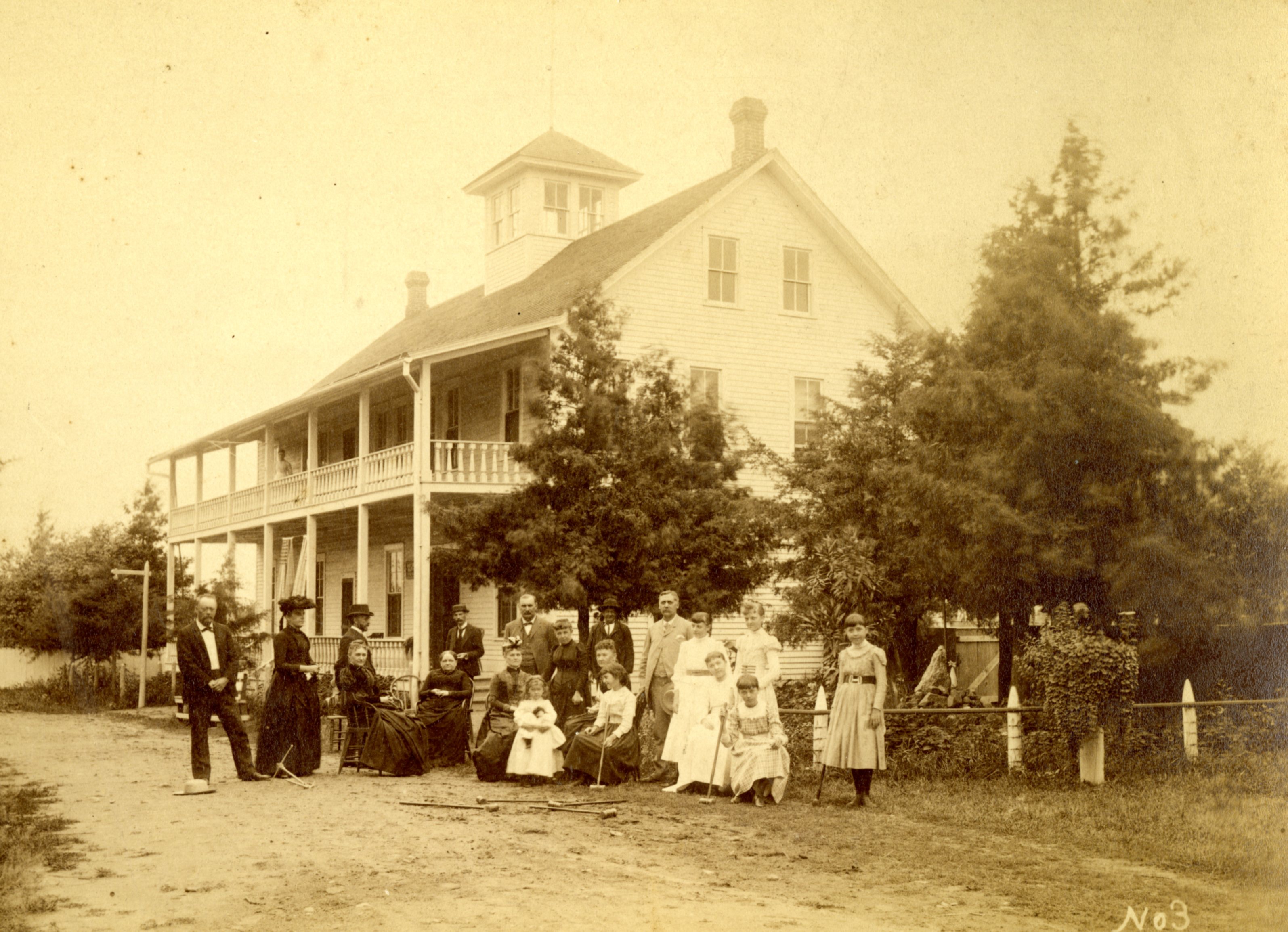 The Marsh House became a famous resort, entertaining guests from all over the world. Presidents McKinley and Cleveland were visitors, but wealthy St. Paul people were the chief patrons. At the height of its popularity in the 1880s, the summer resort hotel had room for 75 guests, who were provided with boats and fishing tackle. For non-fishermen and ladies, there was the fashionable game of croquet and a small steamboat, the Germania, for excursion trips on the lake. Other hotels and rental cottages competed for tourist business. Factories in the Twin Cities often held their summer outings in Forest Lake. Two large dance pavilions operated at the same time and also offered public entertainment. In the center of town on the lake were picnic grounds, tennis courts, a bandstand, a coaster slide, and a bathhouse with bathing suits for rent. By 1897 excursion trains ran daily from St. Paul.

As the town center grew, other stores, a blacksmith shop, post office, and school were established. In 1876 Ole and Gust Alm opened a general store. There was a little starch factory where people took their potatoes. The wheat they grew at first had to be hauled to the grist mill in Marine, but by 1880 there were milling facilities in the village. In 1880 a creamery was started by John Houle and A. H. Anderson. Houle also operated a charcoal kiln southwest of the village. By World War I the railroad village boasted a large cooperative creamery, telephone service, bank, dry goods, grocery and hardware stores, a roller mill, elevator, and a stockyard. 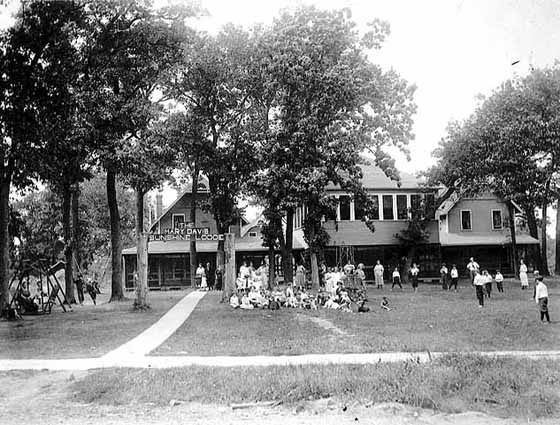 The Mary Davis Sunshine Lodge, established in 1903 on the site later occupied by City Hall, drew hundreds of poor children from the Twin Cities every summer. The camp was moved in 1926 to the south shore of the lake. In July of 1910, the first Boy Scout club in Minnesota was formed: The Forest Lake Wolf Patrol. Many lakeshore cottages were built between 1910 and 1930. By the 1920s Forest Lake was a busy place on the main road from St. Paul to Duluth, later Highway 61. Housekeeping cabins and rustic cottage resorts flourished in the 1930s and ’40s as did roadside restaurants and watering holes that drew thousands of summer visitors and automobile tourists.

In the early 1900s the farming community of Garen could be found on Highway 61 south of Forest Lake. Here the railroad built a switch line with cattle pens so farmers could load their cattle into boxcars for shipment to St. Paul. Garen also had a store and a school that doubled as the community center. The Half-Way Inn was a popular roadside stopping place in the 1930s and ’40s.

Chicago gangsters were known to hang out around Forest Lake. The infamous “Ma” Barker and her gang were said to have occupied one of the cottages behind the Forest Theatre. Other gangsters were thought to have rented the Smith cottages on the east side of Forest Lake. Many otherwise law-abiding citizens turned to making “home-brew” in their kitchens and basements. Local police were quite tolerant of bootlegging. The big trucks loaded with illegal whiskey used old roads to get to St. Paul and nobody dared stop them. It all quieted down when the 18th Amendment was repealed in 1933.

By 1969 the flavor of the town had changed. Interstate 35 was completed, connecting Forest Lake with the Twin Cities and making commuting much faster. Forest Lake became a bedroom community and many of the summer cottages were turned into year-round homes. Industrial and commercial growth has moved from Highway 61 to concentrate along the freeway strip.

Originally part of Marine Township, Forest Lake Township was organized in March 1874 and incorporated in 1893. The Village of Forest Lake was platted on the northwest shore of the lake in 1868, but not organized until 1893; it became a statutory city in 1974. Forest Lake has grown from a population of 4,600 in 1980 to 12,500 in 1990. Since the annexation of the Township into the City of Forest Lake in 2001 the population has increased to over 17,000.