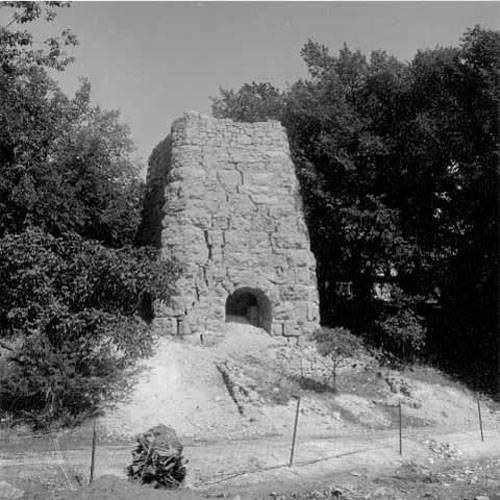 Grey Cloud Island has a long history of settlement by Native American peoples. It was an important place for the Woodland mound-builders (c. 100 BCE to 600 CE) and for people of the Late Mississippian culture around 1000 CE. The island has the largest concentration of mounds in the county.

The only Indian village known to have existed in Washington County was on the island. In the 1830s about 40 families of the Mdewakanton band headed by Medicine Bottle moved from Kaposia (South St. Paul) to the northwestern par of Grey Cloud Island.

The Treaties of 1837, by which the Dakota ceded their lands east of the Mississippi to the United States, required that all Dakota villages be moved, so in 1838 Medicine Bottle moved to Pine Bend in Dakota County. The bark houses his band left behind were taken over by the families of fur trader Hazen Mooers and his son-in-law, Andrew Robertson. Robertson named the island for his mother-in-law, Margaret Mooers, whose Dakota name was Grey Cloud Woman.

That same summer another trader, Joseph Renshaw Brown, moved his family onto the southern part of the island to a spot called Chanwakan—Medicine Wood in Dakota. These families traded furs and cultivated farms where they raised corn, wheat, vegetables, and livestock. They were soon joined by several others, mostly former voyageurs of French Canadian heritage and other employees of the American Fur Company, many of them married to Dakota women. The Dakota and French Canadian presence has remained very strong on the island.

In 1856 Joseph R. Brown, St. Paul banker Truman Smith, and lumberman William Gallagher platted Gray Cloud City on the site of Brown’s farm. Gray Cloud City was advertised as having 400 lots, a good steamboat landing, and a view of the river. It boasted a large store and warehouse, a brick yard, and blacksmith shop, but few settlers moved there. The panic of 1857 appears to have put an end to Gray Cloud City. The site became part of the Oliver Ames farm in the 1860s and, because the dam at Hastings has raised the level of the river, is now partly under water.

While this settlement failed to materialize, there is an early industrial site in the township. Overlooking Grey Cloud Channel, the Grey Cloud Lime Kiln (on the National Register of Historic Places) dates back to at least 1846. It burned limestone rock to produce quicklime, used for mortar, plaster, and fertilizer.

From the time of earliest settlement, there was a road from Grey Cloud Island to Newport and one leading to Point Douglas and Cottage Grove. The island itself is separated from the “mainland” by a small channel known as Grey Cloud Slough. By 1846 there was a way across the slough that could accommodate wagons hauling wheat from the island to Afton for milling. A timber frame bridge, erected in 1882 at the “old county road crossing,” was replaced by a steel bridge in 1946.

David Hone, one of the founders of Marine on St. Croix, lived on the island for a while, as did Woodbury pioneer Alexander McHattie. James Norris, first permanent settler in Cottage Grove, arrived in Washington County as a clerk employed by Mooers and Robertson on Grey Cloud Island.

When Minnesota became a state in 1858, Grey Cloud Island was included in Newport Township along with Saint Paul Park and Newport. In the 1960s Newport and Saint Paul Park became cities and the remainder of Newport Township was renamed Grey Cloud Township. It is still rural. The township has no schools, churches, bars, library, police station, or firehouse, but does have a quarry and about 125 homes. The southern part of Grey Cloud Island was annexed to Cottage Grove in the early 1980s.

In the early 1900s Grey Cloud Island contained about 3,800 acres, partly in Newport and partly in Cottage Grove, and had a population of 125. By 1990 the number of residents in Grey Cloud Township had swelled to about 400, but the latest [2010] census shows only about 300. Because of the rising water levels, it now consists of about 2,000 acres.