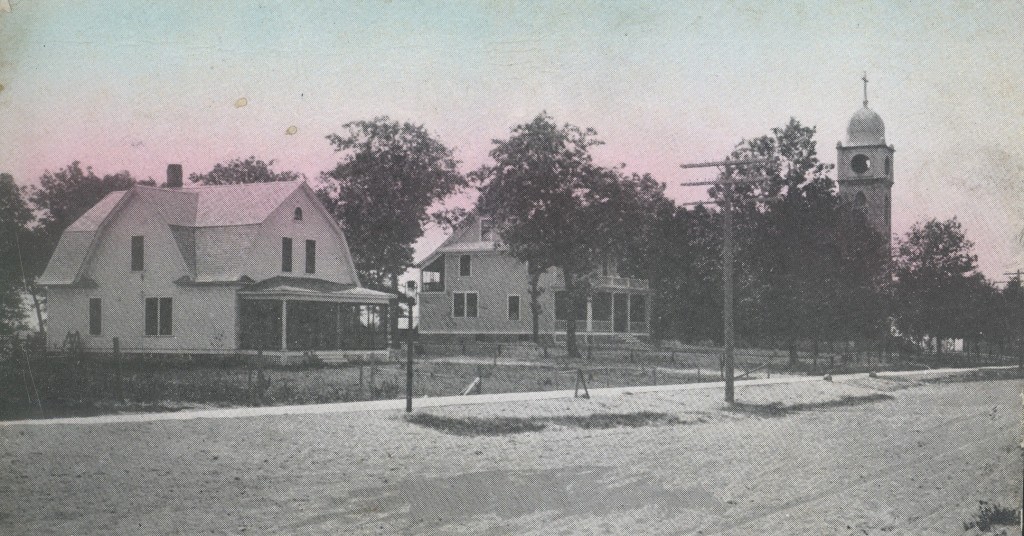 Hugo was once Oneka Township. It was settled in the early 1850s and organized in 1870. Most of the population was and is of French and French Canadian ancestry. In 1949, people still spoke French fluently and followed some of the old French customs.

The township took its name from Oneka Lake, located near the center of the township. The name comes from the Dakota word “onakan,” which means “to strike or knock off,” the method of harvesting wild rice into a canoe. Nearby Rice Lake was once the resort of Dakota Indians who came from Mendota every summer to gather the wild rice, which they sold in St. Paul.

In 1856 land on Oneka Lake was surveyed and platted and given the name of Washington. Like many paper towns of those days, Washington never developed. The Village of Hugo was originally called Centerville Station. It arose when the Lake Superior & Mississippi Railroad (later the Northern Pacific) bypassed the village of Centerville, three miles west in Anoka County. Centerville Station Post Office was established in 1874.

Early entrepreneurs were French natives Louis and Françoise Kuchli. They came to the area in 1872 and built a store, hotel, and “sample room,” the first businesses in the village. The 258 people in the area decided to incorporate in 1906. However, the Post Office requested the village be incorporated under a different name to avoid the confusion between Centerville in Anoka County and Centerville Station in Washington County. The name Hugo was said to have been proposed by Michael Houle after the name “Houle” was rejected by the village.

Why Hugo? Some say it was named after the famous French author Victor Hugo; others that it was named after Trevanion William Hugo, who was chief engineer of the Consolidated Elevator Company in Duluth and former Duluth mayor (1900-1904) and who likely had ties to the railroad.

The area’s earliest settlers opened up stock farms and put up hay crops. The first road, connecting the settlement with St. Paul, was established in 1869. By 1883 the village consisted of about four or five families. That year the Piette family settled there and set up the first blacksmith shop.

After the railroad came through Hugo in 1869, many families made their living, at least in part, by cutting wood and hauling it to the railroad in winter. All the trains stopped here to refuel. The Inter-State Lumber Company opened in Hugo in the early 1900s. A telephone office was established in 1905, and a bank organized in 1910. The Hugo Feed Mill was built in 1917.

The southwest corner of Hugo contains a portion of Bald Eagle Lake, which straddles the Anoka, Washington, and Ramsey county lines. Development began around the lake in the 1880s. Resort hotels sprang up to accommodate vacationers coming out from St. Paul. Shadyside, a ten-block area, was laid out in 1880 adjacent to the railroad tracks on the northeast shore of the lake to provide summer housing. The railroad made it possible for families to live at the lake while the breadwinner commuted easily to St. Paul.

With the advent of automobile touring, businesses catering to the motoring public lined up along the Highway 61 corridor in Hugo. During prohibition many “soft drink parlors” peddled moonshine and installed slot machines. After repeal, and under new management, these places thrived as popular road houses and night clubs. However, for the most part Hugo has remained agricultural and is home to many horse farms.

In the 21st century, Hugo is one of the county’s suburban growth centers. Its bucolic atmosphere and proximity to Interstate 35E, just two miles away in Anoka County, have made it a popular commuter suburb.

In 1972, Oneka Township was incorporated into the City of Hugo. A new city hall was built in 2001. It is still an agricultural community; however, there has been considerable suburban development in recent years, more than doubling the population from 6,300 in 2000 to an estimated 14,082 in 2013.