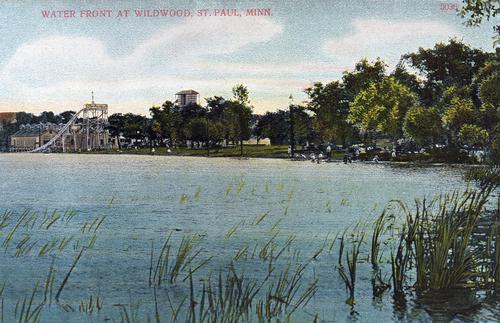 Mahtomedi started out in Greenfield (renamed Grant) Township in 1858. In December 1918 Mahtomedi became a part of Lincoln Township, which was organized out of the western sections of Grant. Lincoln Township also included the villages of Dellwood and Wildwood, along with the east half of White Bear Lake. The name Mahtomedi comes from the Dakota name of the lake—mató, the grey bear, and mde, a lake.

Mahtomedi, a village consisting mostly of summer homes, was platted in July 1883 by the First Mahtomedi Assembly of the Chautauqua Association. The Chautauqua concept originated in New York State to train Sunday school teachers, but soon introduced correspondence courses, lecture-study groups, reading circles, and summer assemblies, filling a need for adult education. The Assembly built several cottages and a fine tabernacle seating 3,000 people on the southeast side of White Bear Lake. Tent villages sprang up—one summer there were more than 3,000 people in tents during Chautauqua. A large amphitheater was located northwest of Hamline Lake. In 1888 the YMCA built a clubhouse on the lake with dock, boathouse, and dining room. A spacious hotel was also built for those who did not want to rough it in tents.

The Lake Superior & Mississippi Railroad reached the east side of the lake in the early 1870s, following the general route of Dellwood Avenue. The Minneapolis & St. Paul Suburban Railroad Co. reached the area in 1892. In 1899 the Twin City Rail Transit Company began regular streetcar service to Mahtomedi and Stillwater. The company also established Wildwood Amusement Park and picnic grounds on the southeast shore of White Bear Lake. It was an immediate hit with St. Paulites who rode out on the streetcars for 10 to 15 cents—no admission was charged to get into the park. The park featured a roller coaster, plus other rides such as the Giant Airplane Ride out over the water. Attractions over the years included traveling shows, diving ponies, and balloon ascents. On weekends 1,000 people daily came to the park; weekdays saw 400-500 daily.

West of the rides was the bathhouse and one of the lake’s finest bathing beaches with water chute, spring boards, and baseball played in the water. Fishing boats were for rent and, until the 1920s, steamboats made regular tours around the lake. The park’s dance pavilion boasted a fine restaurant and promenade that overlooked the lake.

The coming of the automobile was the beginning of the end for Wildwood Park; people became more mobile and could travel where they liked. Loss of business and the depression forced closing of the park in 1932. The dance pavilion stayed until 1937 and the park was dismantled in 1938.

The Wildwood Park Association owned much of the remaining land by the lake and platted Lakeview addition in 1892, Oak Grove in 1904, Eastshore in 1906 and Forest Heights in 1914. Wildwood Manor (now Willernie), a small community of summer cottages on narrow streets and small lots, also dates from 1914. It was a sort of suburb for Wildwood Park, and had a few year-round residents.

In 1932 Al Karpis, Arthur (Doc) Barker and Kate (Ma) Barker rented a cottage in Mahtomedi and were said to frequent Dick’s Inn. Residents found them quiet, well-mannered, and bill-paying. When the FBI began making inquiries, the gang made a quiet departure. Other well-known gangsters that were thought to reside for a time in the area were John Dillinger, “Baby Face” Nelson, “Bugs” Moran, and Gus Nichols. Some of these were said to live in White Bear, but in 1932 the White Bear newspaper indignantly stated that the gangsters’ hideout was “over several miles from here—it is in Washington County.”

In August 1931 residents voted (225 to 180) to incorporate as the City of Mahtomedi. Over the years Mahtomedi, through petitions, annexed other sections of Lincoln Township, and in January 1972 the merger of Mahtomedi and Lincoln officially took place. The city has grown steadily, from about 5,570 in 1990 to about 8,000 in 2005.