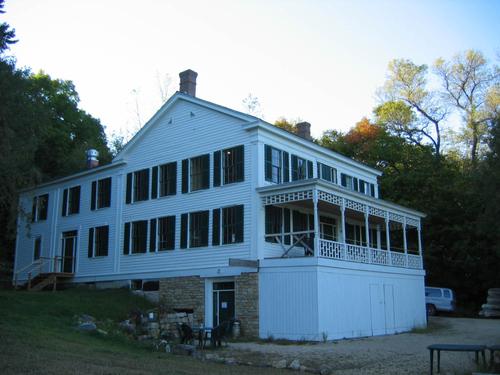 Early settlers in Marine Township (the name until 1893) were lumbermen originally from the eastern states, chiefly New York, Pennsylvania, and New England. By the mid-1850s most of the immigrants were arriving from the Scandinavian countries, mainly Sweden. Other early immigrants were Irish, German, English, and Canadian.

Minnesota’s first sawmill starting sawing in Judd’s Mills, now Marine, in 1839. In 1846 Martin Mower and others built a water-powered sawmill and adjacent home and store between Marine and Stillwater in an area that would eventually become known as Arcola Mills. By 1856 the water-powered mill had been replaced by a steam mill that produced two million feet of lumber a year. Mower was involved in many enterprises including building of the Territorial Prison in Stillwater, establishment of the St. Croix Boom Company, and construction of a business block in downtown Stillwater.

May Township was organized in 1893 out of the southern part of Marine. A year later the Town Hall was built and the first supervisors were elected. Along with various road and bridge improvements, the first supervisors made an attempt to organize a village along the west shore of Lake Carnelian in hopes of developing a prosperous summer resort. One of the town’s early settlers was an English immigrant who eventually became one of the more prosperous farmers of the northwest, at one time owning 2,000 acres. It was after this man, Morgan May, the township was named.

In the 1880s Stillwater lumberman Isaac Staples assembled a 3,500-acre stock and dairy farm in the township to supply his lumber camps. Maple Island, located on the railroad, had a store, elevator, feed mill, and creamery, and was a shipping point for grain.

May Township remained a stable rural area with a promising resort and recreation business and a relatively static population through 1950. Locals as well as St. Paulites flocked to resorts on Big Marine Lake. The Veterans’ Rest Camp and a Girl Scout camp were also established on the lake. The neighborhood was a popular vacation area, and there are many stories that St. Paul mobsters liked to hang out at the various resorts back in the 1920s and ’30s. At the edge of Withrow, most of which lies in Grant, the distinctive Zahler Dance Hall was built in 1929 and became a popular “hot spot.”

Scenery-seeking tourists flocked to the St. Croix River from earliest days, many enjoying it from excursion steamboats. Unfortunately for its development as a resort area, the railroad did not push through May Township until 1887. The township’s popularity as a summer destination had to wait for the construction of roads suitable for automobiles. By 1910 St. Paulites were driving to summer homes on the river and pioneer farms were being sold as camping and building sites. Benjamin Sheffield, president of Big Diamond Milling, built his log home, Croixsyde, on the river in 1922. Dunrovin, the home of Reuben Hadrath, is now a Christian Brothers retreat. North of Marine, lands once owned by lumberman William O’Brien were opened in 1952 as a Minnesota State Park, the first readily accessible to Twin Cities’ drivers. Much of the old Morgan May farm near Square Lake was developed in the 1960s by the Amherst H. Wilder and the Lee and Rose Warner Foundations to provide natural areas suitable for environmental learning

During the 1950s, expansion of the transportation network in the metropolitan area began the process of suburbanizing the township. A boom in residential development has caused the population to more than triple since 1960. At present, land in May Township is a mixture of residential use, agricultural use, and public open space.

Historic Sites in May Township