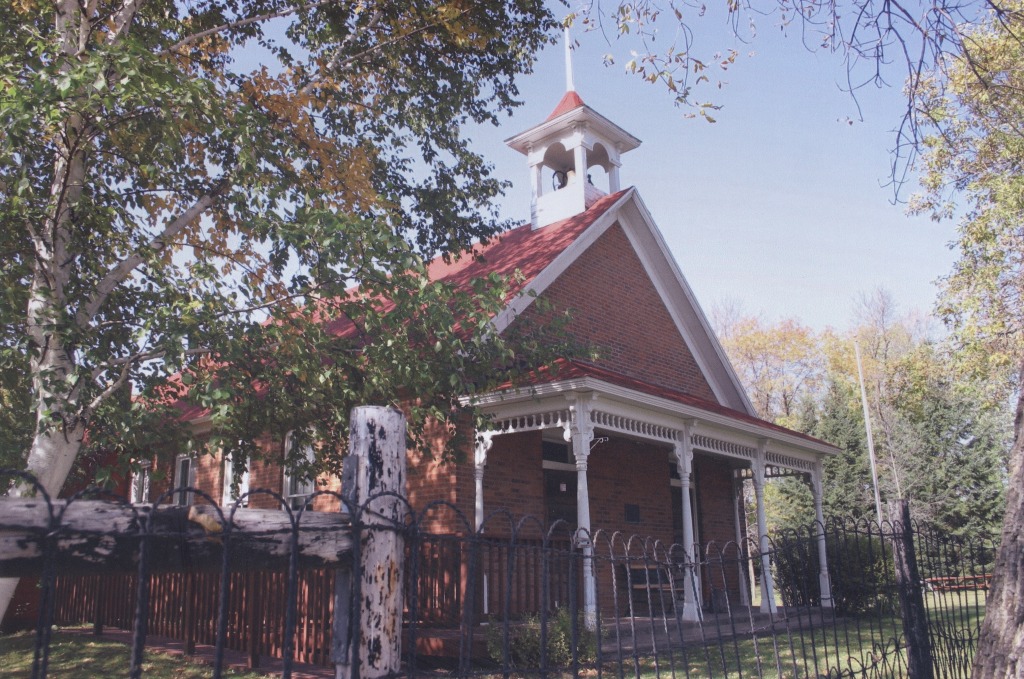 Scandia is best known as the home of the first Swedish settlers in Minnesota. The settlement dates from 1850, when three young men from Sweden—Carl A. Fernstrom, Oscar Roos, and August Sandahl—established a farm near Hay Lake. The trio stayed only a year, selling the farm in 1851 to another Swedish immigrant, Daniel Nilson.

Other Swedes, many from Skåne and Varmland provinces, arrived during the early 1850s. A monument inscribed with the names of these first settlers stands near the site of the original log house, at Hay Lake Historic Corner, about a mile-and-a-half south of Scandia.

The indigenous people and their traders used the St. Croix as a highway. When white settlers began to arrive, they, too, came by the river on steamboats. Many came through the Marine Mills settlement, but others arrived at a place called Loghouse Landing about three miles north of Marine. Strangely, no settlement grew up on the St. Croix, although several were started.

A passable road was built from Stillwater to Marine by 1841, and a Territorial Military Road from Point Douglas to the St. Louis River was completed through the township in 1853. This, coupled with the coming of the railroad to Stillwater in 1870, gave the immigrants other routes into Washington County. By 1886 depots had been built at Copas and Maple Island Farm, making it easier for immigrants to travel to their new land.

The first community on the river, in what was then Vasa Township, organized in 1858, was also called Vasa, name for the Swedish king, Gustavas Vasa. Benjamin Otis came to settle the area in 1849, keeping a hotel called the Vasa House, a half-way stop on the road from Stillwater to Taylors Falls. Vasa townsite was platted from the riverbank back 400 feet on the plateau in 1856, and a sawmill, store, post office, and saloon were soon built. The settlement fell prey to the depression of 1857, and in 1860 the post office was discontinued.

The area became known as Copas for an early Italian settler, John Copas, who built the log store there in 1854, but languished until the railroad came through in 1886. It got new life as buildings were constructed along the Soo Line tracks. In its heyday, Copas processed about 100,000 bushels of potatoes annually. Eventually trucking supplanted rail, and the railroad phased out passenger service. In 1963 the Copas depot was moved away. The last building was razed that same year, and Copas disappeared.

The community that grew up at the original Loghouse Landing was given the name of Otisville in 1859. It survived for a while as a destination for steamboat excursions. Now it, too, has completely disappeared.

The hamlet of Scandia, never incorporated as a village, grew up around the original Swedish settlement. The settlement got a post office in 1878, but lost it for a time when the railroad went to Copas instead. However, the village prospered and over the years acquired several stores selling groceries, dry goods, hardware, farm machinery, and other necessities to local farmers. The first creamery was built in the village in 1894, a telephone exchange in 1914, and by the 1920s the community could boast a dentist, doctor, barber, and milliner as well as a bank and an auto dealership.

The Big Lake Community, on the west side of Big Marine Lake, thrived from the 1860s through the 1890s. Mayberry Trail was then an oxcart path cut through the woods by the pioneers. This settlement of mostly Swedes, many from Småland, revolved around the Kuno Store and Big Lake School on what is now County Road 15 (Manning Trail), but the nucleus of a village never developed.

Locals as well as St. Paulites flocked to resorts on Big Marine Lake. The Veterans’ Rest Camp and a Girl Scout camp were also established on the lake. The neighborhood around Big Lake was a popular vacation area, and there are many stories that St. Paul mobsters liked to hang out at the various resorts back in the 1920s and ’30s. John Dillinger is supposed to have hidden out in a cabin on Big Marine Lake. The local story is that he bought his eggs and milk from neighbor Joseph Dahlquist. Mobsters were also said to have been seen in Scandia.