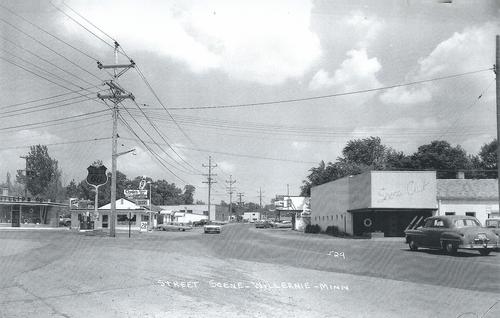 Willernie was originally included in Grant Township, as were the other communities on the western fringe of Washington County near White Bear Lake. When Lincoln Township was organized out of the western sections of Grant in 1918, it included the village of Willernie, then called Wildwood Manor.

Although people began to settle in the area in the 1870s, and several plats were filed in Wildwood in the 1880s, the village got its real start in 1914. Wildwood Manor was platted that year by the Wildwood Park Association as a sort of suburb for the popular Wildwood Amusement Park on White Bear Lake. Built to resemble a picturesque and rambling English village, Wildwood Manor was a small community of summer cottages on narrow streets and small lots across from the amusement park. At first it had few year-round residents.

Development of the community was closely tied to the rail lines. The Minneapolis & St. Paul Suburban Railroad Company reached the area in 1892, and by 1899 the Twin City Rapid Transit Company had began regular streetcar service from St. Paul to Wildwood Park and beyond to Stillwater.

Advertisements extolled the beauty of the area to lure summer tourists. In 1910, the streetcar company could boast: “Take any car for Wildwood at Wabasha and 7th Streets. Fare to Wildwood, each way, 15 cents; time, 40 minutes; distance, 12 miles. Past North St. Paul and Silver Lake, with pretty farms and ever-changing verdant pictures on all sides, the line sweeps into Wildwood, the Beautiful, where one may find rest, comfort, coolness, and kindred delights of the good old summertime.”

By 1916, Wildwood was the site of the car barns, and also boasted an inn, grocery store, and garage. The Piccadilly restaurant was there as well on “The Front,” as the villagers called their main street, now Stillwater Road. Just a short walk away was Wildwood Park with its facilities for dining, dancing, and other entertainment. Residents could sit on their front porches and hear the music from the dance bands playing in the Pavilion by the lake. Some of the earliest residents were musicians employed at the Pavilion.

Other businesses on Willernie’s “Front” over the years have been a tailor shop, several restaurants and taverns, the Glazer Bakery, a hardware store, and a millwork operation. Willernie also had a private beach on Lake Washington, on the south side of the village, where the St. Paul Athletic Club conducted yearly swimming races. The lake was also popular for boating and canoeing and, in winter, ice skating.

Legend has it that Ma Barker’s boys and their gang frequented Dick’s Inn back in 1932, where they often reserved the “Blue Room” for private parties. Members of the gang were said to live quietly in Willernie, traveling to St. Paul to commit their crimes. They decamped quite suddenly in 1936, about 12 hours ahead of the feds.

Over the years the village acquired paved streets and sidewalks, police protection, and street lighting. City water, sewer, and gas were installed in 1960s. Today the City of Willernie has slightly more than 550 inhabitants, about the same as in 1990. It is still totally without industry and shares its commercial district with the City of Mahtomedi, which entirely surrounds it.

The Village of Willernie was incorporated in 1948 with about 82 acres (only 77 acres are not water), making it the county’s third smallest community.