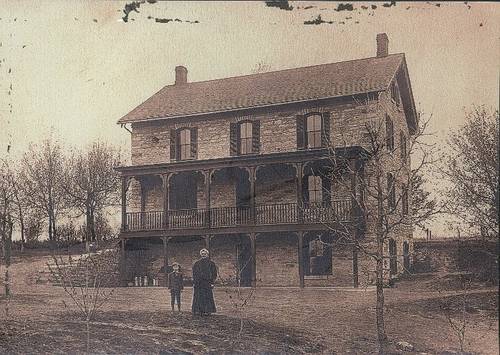 This house, originally owned by the Spangenberg family, was purchased by the Czikalla family in 1901. Standing in front of the house are Mrs. Frank Czikalla and her son Leonard Czikalla, Sr., ca. 1905. The Czikalla family owned the property until 2008.

In the 1840s the area that became Woodbury was a rolling prairie interspersed with oak groves. There were several lakes, numerous ponds, and few settlers. There was a road or a trail across the prairie from the settlement at Afton to St. Paul. The trail became Afton Road, the main street of the old settlement, today mostly obliterated by new development and highways.

The first settlers made their claims close to the road south and east of Colby Lake. Among the first was John McHattie in 1841. His brother Alexander, who was living in Afton in 1841, joined him in 1845. William Middleton made a claim in the same area in 1844. The establishment of Minnesota Territory in 1849 attracted new settlers, many of them Germans. The Military Road from Point Douglas to St. Paul via Newport was laid out in 1849, followed by a county road from Newport to the St. Croix (modern Bailey Road), and a territorial road from St Paul to Hudson on the line of today’s Interstate 94

Under the constitution of the new state of Minnesota in 1858, township governments were established for the first time. Woodbury was first included in Red Rock Township—present Woodbury plus Newport. When it was learned that there was an earlier Red Rock town, the name Woodbury replaced it, chosen by John Colby in honor of Levi Woodbury of New Hampshire, who had been successively judge, Senator, Secretary of the Navy and Treasury, and Supreme Court Justice. The village of Red Rock was split off in 1861 and the first town hall built on the Afton Road in 1875. That was sufficient government buildings for Woodbury until 1957, when meetings were switched to the Woodbury Community Hall.

The center of Woodbury remained on Afton Road between the town hall east of Colby Lake and the post office near the junction with modern Bailey Road. (The older settlers—Middleton, Colby, the McHatties—had their farms in this area.)

Another influx of settlers began in the 1870s as many newer German immigrants established farms. The earliest cash crop was wheat. Dairying became the most important farm enterprise in the 1900s. Livestock—sheep, hogs, and cattle—were raised.

Commercial and residential development was slow in coming to Woodbury. The earliest residential developments were next to Newport village. Newport was something of a transportation hub in pre-automobile days, due to its being at a rail junction. The absence of any railroads in Woodbury helped keep it entirely rural before the automobile. As the highway replaced the rail, there grew a commercial strip along Highway 12, now mostly removed by freeway construction. In 1955 the first automobile subdivision, Woodbury Heights, was built off Afton Road in the northwest corner of the township.

The pace of development was still leisurely. The township began building its first sewer and water lines in 1961. The first fulltime employee was hired in 1965 and the first police officer in 1968. The Village of Woodbury was formed in 1967 and by 1974 Woodbury was a city. By the 1970s dairy farming was disappearing, and much of the farmland was owned by investors or retired farmers. In 1975 Woodbury had 2,504 residences, an industrial park, four schools, six churches, a small shopping center, radio stations, Howard Johnson complex, and several office and commercial buildings scattered throughout the community.

In 1980 the population was a little over 10,000. In the next years, residential and commercial development near the freeway interchanges and toward the old town center increased significantly. The area north of Valley Creek began growing later in the decade. In 1988 a referendum approved a $4.4 million building program for the city hall, public safety building, and fire station. The 1990 census showed a population of about 20,000, doubled in 10 years. Then the real building boom began, and still continues.

The Woodbury Heritage Society preserves and documents Woodbury’s history and to helps residents of their community learn about Woodbury’s early years. The Woodbury Heritage House and Garden are located at the corner of Radio Drive and Lake Road, in Marsh Creek Park. The house is open the 2nd and 4th Sundays June through September, from 1-4 p.m.

Woodbury is the fastest growing city in Washington County. One of the most rural townships in the metropolitan area has become one of the most suburbanized. In 2000 the city had about 46,500 residents, up from just 10,000 in 1980. In 2012 the population was estimated at 64,496 .